Some months back LiveMint  published a photo essay on the life of a delivery boy in India – ‘Sign Here Please’: The Life of a Delivery Boy. These are the hundreds of young men who are zipping around on bikes negotiating the killer traffic of Indian cities  delivering goods that the Indian middle-class is buying online. I have often felt that these the salaries of the delivery boys do not match the stress and risk that they face at work everyday. As a biker, I think the single greatest risk is the dangerous traffic in most of our cities. Add weather conditions to it. Top it up with employer’s targets and we have a crisis brewing. The crisis takes various forms depending on the bargaining position or assertion power that this group of workers might have. Recent strike by delivery boys at India’s largest eCom retailer is covered here, here and here.

It is hard to understand why these Indian companies with billion dollar valuations and much celebrated entrepreneurs fail to even provide basic facilities for workers. The workers reportedly struck work for the lack of toilets at work place! Looking at these incidents it appears that worker wages and worker rights safeguards in India are clearly not functioning, even though legal scholars might sing peans about the comprehensive and robust labour laws in India.

There are three major faultlines along which the safeguarding of worker interests and rights have broken up in the neo-liberal era which is characterized by flow of foreign capital in India and structural reforms introduced by governments (at center and state level) which seek increasing amounts of aid (in the form of low interest, long term capital) from the multi-lateral aid agencies.

This arrangement of hiring (i.e. contract labour) also has made regulation of labour beyond the state’s control.

Figure 1: The change in informal and formal employment in organized and unorganized sectors in India from 2004-2010. (The chart was developed from data sheets available on data.gov portal of Government of India)

Figure 2: Gross commitments by the World Bank Group (comprises of three institutions) in the period 2009-2015 illustrates the flow of capital to India from one source of foreign funds alone. (Data extracted from AidFlow Portal)

The state specific laws which provide for worker benefits and social security have had a variable performance across states. A case in point is the BOCW Act implemented in states. Observations from Karnataka, in an earlier study show that the provisions of the act have had minimal positive effect on the construction workers.[1]

Another noticeable trend is seen in the declining number of registered trade unions in India from 2001-2010. Figure 4 shows the trend. 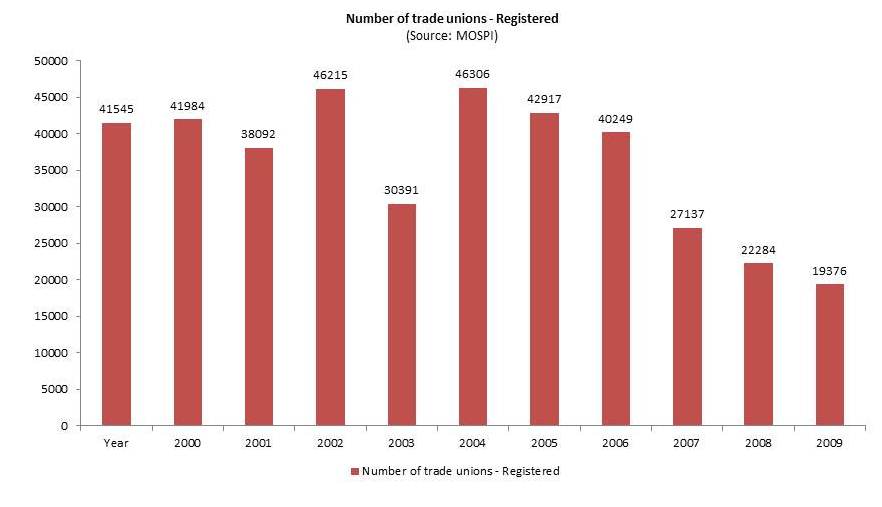 Figure 3: The number of registered trade unions in India from 2000-2009. (Chart made from statistics available on data.gov portal of Government of India)

Future of worker conditions and remedy

In the present scenario, the odds are pitted high against the workers. They continue to remain gardeners of the beautiful garden of India’s economic growth on the terms set by the companies which bring in investment and job opportunities. Then, they are subjected to the political interests of the states where they find jobs. The state ends up determining how weak or strongly the worker rights are safeguarded in the state. Further, that migrants provide the labour required in several states, it means that the workers are clearly not in any position of bargain. This footloose labour, as Jan Breman has described, will forever be shortchanged in terms of their wages and rights in the current political and economic landscape (Breman, 1996)

First, it must be acknowledged that minimum wages is a blunt policy instrument, when seen as the single most important device in ensuring a decent wage to workers within the labour law framework. It has clearly not worked because various states have gone about determining minimum wage in several different ways, none of which in effect have translated in to wages that the workers would certainly be able to agree as sufficient for their minimum needs in the cities of their work. It may be different in rural areas but in urban it has certainly been inadequate.

Second, the problem of decent work with a living wage is fundamentally political than technical. The solution to this must emerge from inside the polity in India. It clearly cannot be dependent and manipulated by the interests outside of Indian political or economic realm. There is a pressing need for safeguarding the interests of Indian workers with the onslaught of powerful multinational corporations backed by powerful institutions.

Third, a policy design which seeks to change the incentives for local actors – the state government, local suppliers of factors of production and worker unions, must all see a definite win in the idea that their industry grows only on the back of the worker who is well provided for. A worker who earns a sufficient wage which can ensure his physical and mental capabilities is a necessity. There hasn’t been any coherent policy framework with respect to labour conditions in India. A start towards this must start with a premise set on workers’ rights and their representation in the policy making process.

Fourth, accountability relationships need to be restructured in current set up where the industry – state linkage is all prevailing and strong in a manner that it has come to determine the fate of millions of workers across the country. How this accountability relationship of the industry as well as the state can be altered or structured in a manner that the other necessary stakeholder group of the workers is brought into the equation is a question which needs further exploration. This is also important in the current decade because a union as a medium of collective bargain has undergone a steady deterioration. Where it stages a comeback or not, the equation between workers and employers needs a rethink.